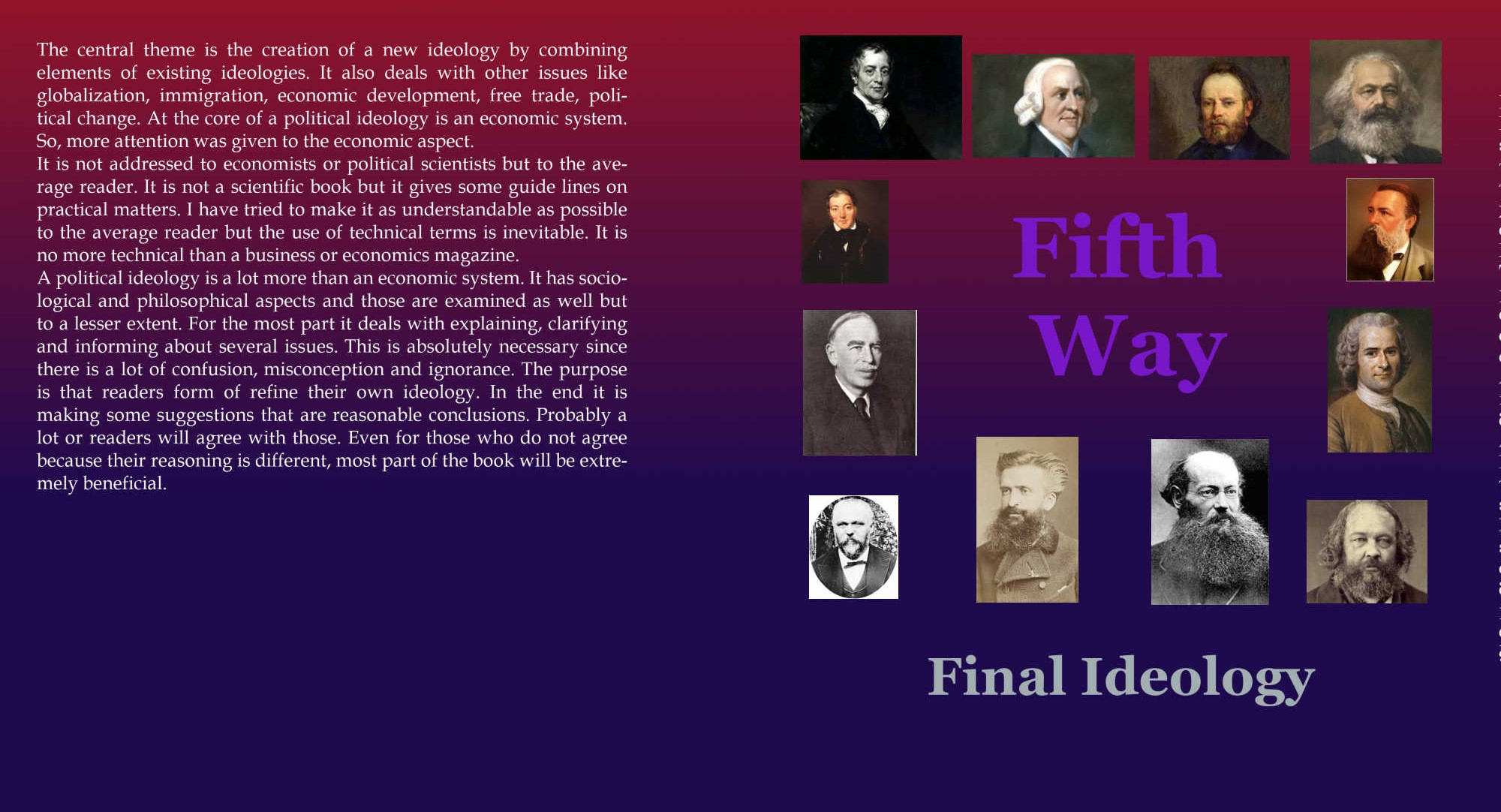 Main Points of Book in the form of articles

Also, Fifth Way could go along a nice and easy alternative globalization like Third Way is combined with ultraglobalization (NWO). Third Way is an ideology popular with ultraglobalists. Fifth Way could be popular among anti-ultraglobalists. They have similarities and differences. First of all the name is similar. Fourth Way was not used because it already exists. Fourth Way is an approach to self development by Greek descent Armenian Georgy Gurdjief (Geordiadis). Fourth Political Ideology is used by Russian Alexander Dugin, whose daugher was murdered in a car bombing, allegedly by Ukranian agents. Fifth is also used for the symbolisms of number five.

An anti-Third Way, anti(ultra)globalist, center-right ideology needs to be developed. May be it would not be exactly what is described in the book (articles). Also, it may have a differnet name other than Fifth Way. The articles (book) give some ideas that could be adopted in the anti-Third Way ideology. Not all have to be incorporated. Also some not mentioned in the articles (book) could be included.

Perhaps the book (articles) will only be the starting point for an anti-Third Way ideology to evolve. Some points are an interesting and unique attempt to compromise between right and left anti(ultra)globalists. Other points offer non-ideological solutions or alternatives that could be adopted regardless of position in the political spectrum. There are also explanations and findings that are helpful to everyone.

There is also the question of how this compromise can be used, taking into account the number of political parties in a country. A compromise between right and left leans toward the center. An equal mix of right and left elements is at the center. As mentioned, Third Way is mostly center-left while Fifth Way is mostly center-right. In both cases we have an unequal mix of left and right elements.

Once this happens, there will be time to discuss issues examined in "Fifth Way" and whether some ideas presented can be applied in real economy and real politics. In the end, voters have the final saying and approve or disapprove certain ideas. In applied politics, politicians should express the voters' opinions, according to the party they are in and not try to impose their views on voters and brainwash them as ultraglobalists do.

Books, articles etc influence voters' opinions. There is a difference though between presenting an argument and conspiring to impose views on people using media control, propaganda and brainwashing especially when the latter is accompanied by an effort to establish an ultraglobalist pseudo-elite that will deceive, oppress and exploit mankind.

These articles are not addressed to the general public but to a specific segment. If you are in a position to determine or influence the agenda of an anti-ultra-globalist political party, movement, network, organization etc, you definitely are in that segment. Others as well may be in that segment. You can contact us to find out. When you read the articles, a feedback would be greatly appreciated.

The book will be available to the general public sometime in the future. As mentioned above, many articles can be reached through links in Globalization articles.